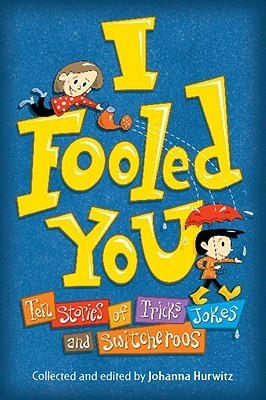 From the catalog: An arrogant prince tries to bluff his way out of paying the bridge troll’s toll, only to find that honesty really is its own reward. Judy Moody dreams up her best-ever prank on Stink, but he finds a hilarious way to make her joke fall splat. And when a boy’s grandfather plays an elaborate trick that has the whole town laughing at him, can he use it one day to big-time advantage? Edited by acclaimed children’s author Johanna Hurwitz, this collection of stories—all woven around the phrase "I fooled you"—range from a comic graphic tale about clever chimps to thought-provoking explorations of fairness, empathy, eccentricity, and the power of imagination.

My story is the one about the troll ("The Bridge to Highlandsville"), and look what Kirkus had to say(!):

"...Hurwitz has asked a group of ten writers to create stories that include the line, 'I fooled you,' a concept that, she reminds readers, is a common feature of most folk and fairy tales. Matthew Holm provides a funny, nearly wordless graphic tale. The final two stories, a new take on the troll guarding a bridge by Michelle Knudsen and a story with a satisfying surprise ending by Ellen Klages, are the best. Douglas Florian contributes a bouncy poem, and stories by Johanna Hurwitz and Eve B. Feldman offer gentle messages about the sometimes-questionable behavior of middle-grade students."